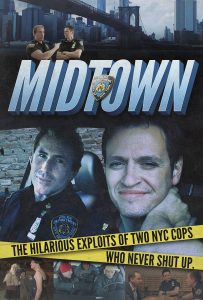 MIDTOWN is the brainchild of former NYPD Cop Scott Baker. After writing the ultra-popular book THE FUNNIEST COP STORIES EVER, Scott began doing stand up and became a top improv comedy performer. On a film set,, he met Tom Malloy, an actor, writer, and comedian, and they realized they had a banter between them that was unmatched. Tom was a graduate of the famed IoWest Improv School in Los Angeles (former graduates include Chris Farley & Tina Fey). This is comedy at its best, with two guys who talk like cops talk.

Scott was a decorated member of the NYPD for 6 years and was forced to retire following a neck and hand injury in the line of duty. During his time on the force he was on patrol during in the 1990’s when crime in NYC topped record numbers and is considered by some to be one of the busiest times in NYPD history. He participated in many different police duties including plain clothes. Scott was awarded several medals for Excellence in Police Duty. He is part of the improv comedy team of Isaacs & Baker which head lines in Casinos and Resorts around the country. It and has been called “ The Best Comedy Team On The East Coast” by Mohegan Sun Casino. Scott has written 3 books about his time as an NYPD officer. Funniest Cop Stories Ever ( Andrews McMeel) was published in 2006. It was so successful that Andrews McMeel asked for a 2nd book A Lighter Shade Of Blue published in 2011 He also has an award winning Ebook A Warmer Shade Of Blue: Stories About Good Things Cops Do. Scott has also created the TV pilot The Fuzz Directed by Seinfeld pilot director Art Wolff He also presently teaches improv comedy at Hofstra University.

A critically acclaimed actor, Tom wowed Hollywood with his stunning turn in the indie-cult favorite GRAVESEND in 1998, which was produced by Oliver Stone. Recent acting projects include starring roles in #SCREAMERS (in theaters 2018, now on VOD everywhere), Shattered, the upcoming Trauma Therapy, Hero of the Underworld, Ashley, directed by Dean Ronalds, which was in theaters in 2013, Love N' Dancing, which was directed by Rob Iscove (She’s All That), and stars Amy Smart, Malloy, Billy Zane, Rachel Dratch, and Betty White; the psychological thriller The Alphabet Killer, directed by Rob Schmidt (Wrong Turn, Crime & Punishment in Suburbia) and stars Eliza Dushku, Cary Elwes, Malloy, Timothy Hutton, Michael Ironside, and Oscar Winner Melissa Leo; and The Fuzz, a presentation pilot directed by Art Wolff, Director of the Seinfeld pilot. As a comedian, Tom is a graduate of the famous Improv Olympic (IO) Training Center in Los Angeles (former graduates include Chris Farley, Tina Fey, Amy Poehler, and Steve Carrell). As a Stand Up Comic, Tom has appeared at Caroline's Comedy Club and the Broadway Comedy Club in NYC, and at the LA Improv.

Rick Staropoli is a corporate trainer by day. By night, he’s a voiceover artist out of his home studio, a narrative film producer, a commercial actor, and an uncle, brother, son and husband. Not in that order. His voiceover clients include Volvo, Bank of America, Kodak, Carestream Health and the southern chain 4 Wheel Parts (for whom he was the TV and in-store voice for over 6 years). He’s been seen on stages all over the Rochester, NY area, including Geva (Dial M for Murder and John Bull’s Other Island), RCP’s Shakespeare Players (Edgar in King Lear and Aumerle in Richard II), Limelight Productions (Archer in Mamet’s November) and Black Sheep Theatre (primarily as Edgar Allan Poe). He estimates he’s been in 20+ short narrative films, 50+ training videos, and several feature films. He’s produced 5 short narratives, two features, a music video and a handful of other videos. But only once has he won a karaoke contest.